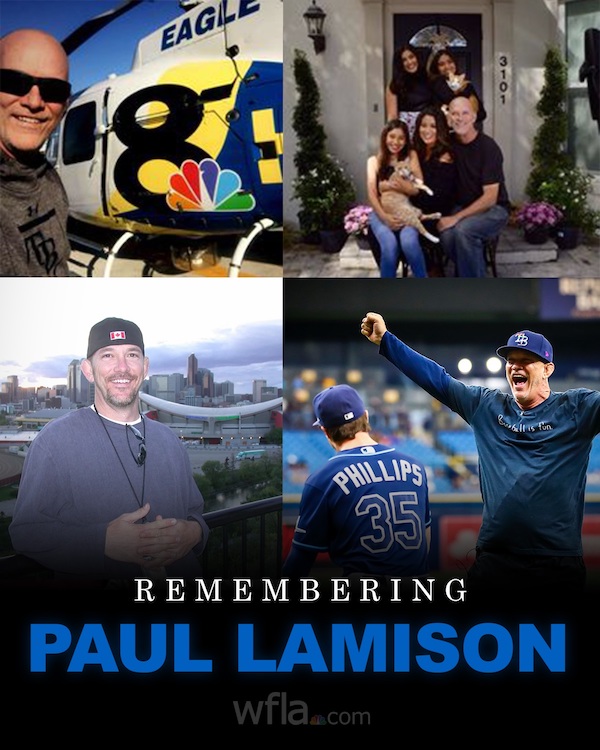 The Lost remote The newsletter brings you the best in streaming news, from personnel changes and premiere dates to trailers and the latest platform moves. register today.

“It is a sad and difficult day as we at News Channel 8 mourn the unexpected loss of chief photojournalist Paul Lamison,” the station said. wrote on Twitter. “We are devastated by the sudden loss of
@8_plamison but grateful for all he has brought to our team and the impact he has had on us.

The Tampa NBC affiliate said Lamison died after suffering a heart attack, leaving behind a wife, daughters and several siblings.

Lamison began working at the station in 1993.

It’s a sad and difficult day as we at News Channel 8 mourn the unexpected loss of Chief Photojournalist Paul Lamison.

We are devastated by the sudden loss of @8_plamison but grateful for everything he brought to our team and for the impact he had on us. https://t.co/Z2wsNXo55p pic.twitter.com/UW8HQpkPJd

Colleagues, past and present, have spoken of the effect Lamison has had on their lives.

“Ever since we’ve both been here – and it’s been three decades – he’s been here with us, and he’s still here,” chief operating officer Georges Karalekas said. “I guess it might be a cliché, but people say you see what you get, and that’s Paul. You see what you get. He likes to have fun and he has his dad’s jokes and what he shows on air is what he is in person.

“I spent a lot of time with him because he was working in the mornings with me and we were going out and shooting stories in the field all the time,” the Bloom TV host said. Gaelle Guyardo said. “He was like family – and no matter what the day was like, Paul was there to pick it up.”

WFLA wrote that Lamison was an “accomplished professional” who took pride in telling important stories and “impacted a generation of other journalists along the way”.

“He’s a photojournalist beyond measure and just a great person,” said the former WFLA presenter Rod Carter. “Beyond all of that, he was just a wonderful friend. Even after I left Channel 8, we stayed in touch and he was always someone I could rely on.

“That smile. That great stature. I’m not even going to lie – when I saw Paul walk into something, walk into a room, there were jokes and laughs and good times,” the former said. WFLA photojournalist. Indira Levin. “That’s the part that strikes me. He was a kind of light. He was a light.

“I think it will be a big loss for everyone who knew him and even for those who didn’t know him but knew him through his on-air talent,” Karalekas said. “We will miss him.”