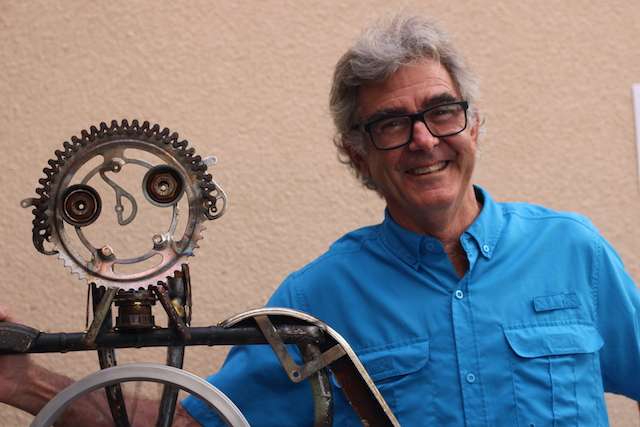 The kids hadn’t even met Gear Guy before they liked him.

Douglas L. Jamerson Elementary, a STEM school in St. Petersburg, unveiled a sculpture made entirely of recycled bicycle parts in April. Standing five feet tall and posed in a permanent wave, the sculpture is the brainchild of Gulfport metal artist Eric Folsom, who named the artwork “Gear Guy.”

“Kids watched me set it up during school hours, so a few of them have already seen it,” Folsom said at the Thursday, April 28 unveiling. “They were so excited. I made it about the size of an elementary school student.

The students huddled together near a tarp ahead of the big reveal. When the covering was ripped off and the trunk of his bicycle wheel was spun, everyone burst into cheers.

“I’ve been looking to do something like this for three years,” said Deborah Oharde, Jamerson’s magnet coordinator. The schoolyard is often the space for drum circles and student-led activities, but lacks a 3D artwork.

When Oharde, a math and art fanatic, walked into the artist’s studio and admired Folsom’s mechanically-inspired work, she knew her work belonged in her school.

“It fits nicely into our math and engineering theme,” Oharde said. “I’m very happy with how it turned out, and I think the kids are too. Teachers are already planning lessons and activities around this.

Folsom is known for his recycled sculptures and metal work around St. Petersburg and Gulfport. In the case of Gear Guy, he spent weeks assembling bicycle wheels, gears and metal parts in his home studio.

“It was kind of like a puzzle, but you don’t know what it’s going to be like,” Folsom said. “I spend more time thinking about how I’m going to put it together than putting it together.”

While bike parts aren’t Folsom’s only medium, it’s an art form close to his heart. The entertainer grew up in Gulfport but spent his early 20s working as a bike courier in Washington, D.C.

He says he’s made the trip from Gulfport to the nation’s capital several times on his bike.

“I would ride my bike and sleep under the stars,” Folsom said.

For now, Gear Guy will live up to its name in the Jamerson yard, but Oharde says the kids will vote to rename the sculpture.

The Gabber team has brought back the print version of the newspaper and we’ve redesigned our website to make it easier for you to get the news. We’re not out of the woods yet, and every little bit helps pay for our reporters, printer, and other expenses. Support local news and families – donate now to keep The Gabber Newspaper serving the community it loves!