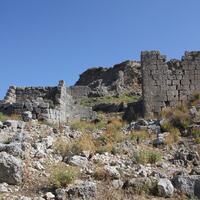 Forge workshop discovered in the ancient city of Sillyon

A forge and knife workshop from the Seljuk period was unearthed during excavations in the ancient town of Sillyon.

Excavations continue in the ancient city of Sillyon, 4000 years old, located in the Serik district of Antalya and home to many civilizations.

The city attracts attention with its Roman theater, baths, tower, mosque from the Seljuk era, Turkish cemetery and the largest stadium in the region.

The excavations are being carried out with a team of 40 people under the chairmanship of the faculty member of the University of Pamukkale, Murat TaÅŸkÄ±ran.

TaÅŸkÄ±ran said visitors to Sillyon could see traces of the Hittites, Persians, the Hellenistic period, the Roman Empire, the Byzantine Empire and the Anatolian Seljuk state.

Stating that Sillyon came out on top with his defense due to its geographical location and that it was one of the towns that Alexander the Great was unable to besiege during his Anatolian campaign, TaÅŸkÄ±ran said he found important traces of urban life during their excavations.

TaÅŸkÄ±ran explained that they were working around a mosque in the city which they said belonged to the Ottoman Empire, adding: â€œWe have revealed with scientific data that the mosque belongs to the Seljuk period. We found a blacksmith’s workshop and a knife workshop around the Seljuk period mosque. It would not be wrong to say that “we found traces of the famous Serik knife in Sillyon”.

Noting that the longest stadium in the region is in Sillyon, TaÅŸkÄ±ran said: â€œWe discovered the details of the stadium during the excavations. The stadium is currently 245 meters long and 65 meters wide. Although Sillyon is a small scale town, we have seen that there are settlements like villages and towns attached to it. It is a city which dominates a vast area, from the seaside of Belek to the foothills of the Taurus mountains.

â€œMenadora, a caring woman from Sillyon, and her family used all of their assets for the development of the city during the Roman Empire. A stadium, Roman baths and monumental tombs have been built and the surroundings of the city have been enlarged â€, he added.

Announcement of the Ocean Photographer of the Year 2021

Photographs of crowds in London and New York before the pandemic