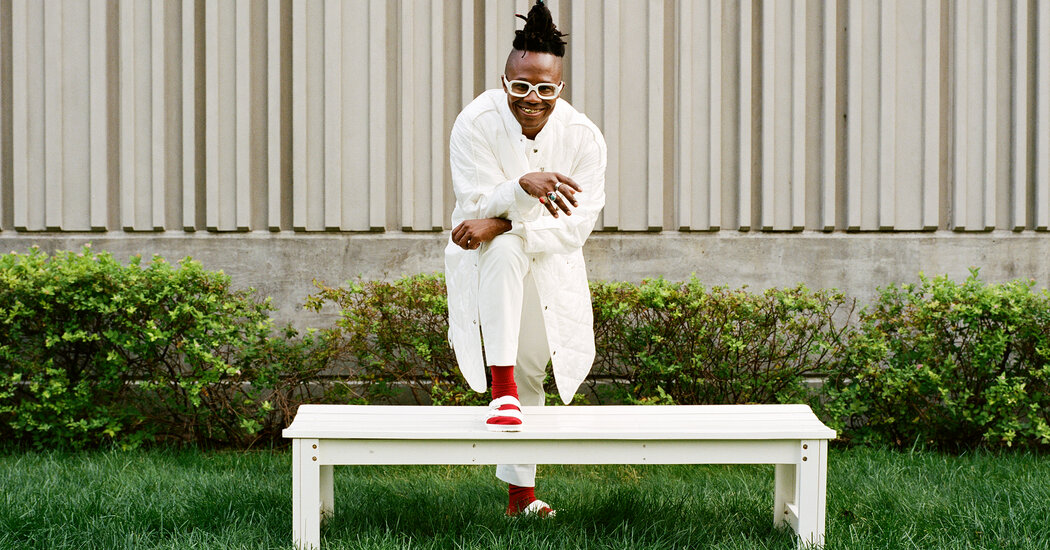 “Fighting for change”: the life of a black artist

This article is part of our last Fine Arts & Exhibitions special report, on how artistic institutions help the public to discover new options for the future.

“Fighting for Change: Fist Full of Tears”, the title of one of five works that Jamel Robinson exhibits at the Hudson River Museum in Yonkers, NY, sums up the artist’s love for puns as well as his philosophy. on what it means to be a black man making art in America.

The piece is a pair of boxing gloves covered in black paint and coins mounted on a large black, green and white canvas.

He is the teaching artist-in-residence at the museum as part of the â€œAfrican-American Art in the 20th Centuryâ€ exhibition, which features 43 works by some of the country’s most famous black artists. Mr. Robinson’s first museum exhibit and the 20th century exhibit will run concurrently from October 15 to January 16.

The Hudson River Museum will be the fifth and final museum to host â€œAfrican-American Art in the 20th Century,â€ a small traveling exhibit from an exhibit originally organized and exhibited by the Smithsonian American Art Museum in 2012.

The Yonkers Museum jumped at the chance to show such acclaimed artists as Jacob Lawrence and Romare Bearden, as well as lesser-known artists from a wider community.

â€œWe’ve been talking for three or four years, and when we were offered the opportunity to be part of the tour, there wasn’t even a discussion – it was such a unique opportunity,â€ said Laura Vookles. , president of the museum’s conservation service. “It’s pretty much a who’s who of African American art and truly great American artists in general of the twentieth century, some of whom were greatly admired in art circles during their lifetime and others who have been rediscovered. . “

When visitors first enter the 3,500-square-foot gallery space, they will be greeted by “Moon Masque,” a striking multi-color oil and collage work by Boston-born LoÃ¯s Mailou Jones, born in Boston in 1905 and died in Washington. in 1998. Created in 1971, it is influenced by its first trip to Africa the previous year; in the center is a papier-mÃ¢chÃ© replica of a mask from Zaire, surrounded by mask-shaped profiles.

This piece touches on many aspects of the exhibit, Ms. Vookles said. Ms. Jones comes from the Harlem Renaissance tradition and then, like many artists, she also turned to African art for inspiration.

The concept of masks is also present throughout the show, “things that are open and closed, hidden and protected and revealed,” Ms. Vookles added. “And I also really liked that we could showcase a woman artist.”

The original exhibit at the Smithsonian American Art Museum included 100 works, half of which are these photographs. The photographs could not be shot due to light exposure problems, said Virginia Mecklenburg, chief curator of the museum; however, the catalog, including photographs, is available with the Hudson River Museum exhibit.

â€œIt was very important for me to include works by artists who were not familiar names,â€ Ms. Mecklenburg said. It was also vital that visitors see a wide variety of works, “so that they understand that there is no such thing as ‘African-American art.’ There are African American artists who work in a wide range of mediums. “

The Hudson River Museum exhibit unfolds somewhat chronologically; one of the first pieces in the exhibition is Palmer Hayden’s “The Janitor Who Paints”, dating from around 1930. Mr. Hayden, who died in 1973, shows a black man painting in a cramped apartment, a trash can in the foreground, while a nearby woman holds a baby. Mr Hayden said the subject was a friend who, like himself, was an artist who supported himself as a janitor.

“If you were black and you were a painter and you were probably supporting some other job, people weren’t calling you an artist – they called you the janitor,” Ms. Vookles said.

This work hangs next to Hughie Lee-Smith’s “The Stranger”, painted in the late 1950s, which features a lonely man – his race is unclear – isolated in a rural setting of rolling hills and mountains. firm. â€œThere is this dichotomy between urban and rural and you can feel isolated in the countryside, but you can also feel isolated in the city,â€ Ms. Vookles added.

Much of the abstract art is grouped together towards the end of the exhibition because “that was its own story,” she said. “A lot of people wanted to lock artists up and say you should paint black subjects, and part of the freedom for these artists was the freedom to do any kind of art they wanted to do.”

This was the case with Norman Lewis, whose 1962 painting “Evening Rendezvous” is both abstract and deeply political. At first glance, these are just pops and amorphous shapes of red, white, and blue against a green-gray background, but a closer look reveals that the white spots are, in fact, hooded Klan men. .

One of Mr. Robinson’s favorite pieces in the exhibit is that of RenÃ©e Stout, one of the few living artists whose work is in the exhibit. â€œThe Colonel’s Cabinetâ€, created between 1991 and 1994, is an installation – a cabinet filled with objects of Colonel Frank, an explorer created by the artist.

The cabinet contains what may be perceived as a jumble, but are in reality objects made and placed methodically by the artist, such as photos, cards, statuettes, a musical instrument, a small skull. â€œI wanted to evoke the same feeling in the viewer that I have when I encounter an ethnographic piece – a feeling of mystery. What do these objects mean? Mrs. Stout said.

For Mr. Robinson, the work resonates deeply, reminding him of his grandmother’s apartment in Harlem and its collections.

â€œIt may not seem intentional at first glance, but you know it’s all placed there for a reason, for you to ask about it,â€ he said. “I think that’s my favorite thing about art – does that thing give me a chance to ask questions, or does it already give me all the information?” “

Mr. Robinson’s exhibition of five works includes â€œFighting for Change: Fist Full of Tearsâ€ (the second half of the name comes from the title of a song by his friend, singer-songwriter Maxwell) and one created especially for the exhibition, entitled â€œThe Beauty of Ashesâ€; the show has the same title. It consists of sand, a small flag and a cross, and 6,000 cents, all mounted on a wooden canvas 48 inches by 72 inches.

The work has many levels of significance, Robinson said: The pennies represent the devaluation of African Americans, who are neglected, just like the pennies themselves. African-American slaves had to cross the sand when they were taken to America and came to this country penniless, forced to work and labor, and then left destitute. The flag and the cross show how the country and religion have oppressed people, but “these iconic symbols are not all bad,” he said. â€œThey have been misused.

â€œIt represents the reality that a younger generation of artists continue to embrace abstraction and question the notion of what noir art is supposed to look like,â€ she said. â€œThe ways we create and express are as diverse as we are as people. “

How landscape photographers can make the most of dull lighting