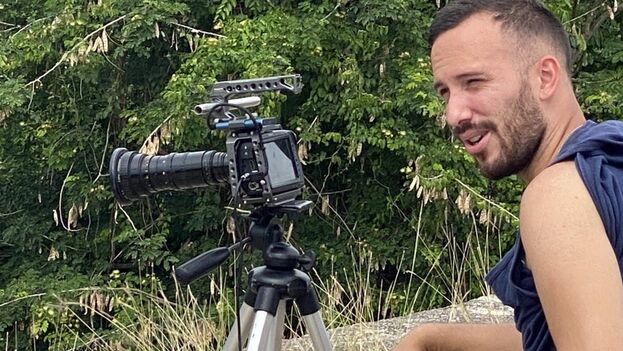 HAVANA, July 21 (Reuters) – An anti-government hip hop song by some of Cuba’s most popular musicians in exile has become the anthem of the unprecedented protests that rocked the communist country last week.

Today, the visual artist who filmed the Cuban section of the video for “Patria y Vida” (“Homeland and life”), Anyelo Troya, 25, was sentenced to one year in prison, according to relatives. He was charged with inciting unrest, they said, after attending a demonstration in Havana.

Human rights activists say this is just the start of what they predict will be a wave of summary trials of hundreds of people held during and after the unusual July 11-12 protests that the government blamed on counter- revolutionaries supported by the United States.

“They took him to trial without a defense or a lawyer or anything,” Troya’s mother, Raisa Gonzalez, told Reuters after witnessing his sentencing in what she called a group trial of a dozen people.

Authorities confirmed on Tuesday that they had started the trials of those detained for incitement to agitation, act of vandalism, spread of the coronavirus pandemic or assault, charges of up to 20 years in prison.

“There are people who will receive the response that Cuban law allows, and it will be forceful,” President Miguel Diaz-Canel said on state television last week. He promised that there would be a proper legislative process.

But Gonzalez said she was not informed of her son’s trial on time and when she arrived in court with his lawyer, he had already been convicted. The trial was denounced by Amnesty International and Human Rights Watch (HRW) for having taken place without adequate defense and due process.

Troya had previously been the subject of heightened vigilance for his participation in the song, whose title is a twist of the revolutionary slogan “Patria o Muerte” (“Homeland or Death”), his mother said.

Javier Larrondo, a representative of human rights organization Cuban Prisoners Defenders, said authorities would likely lock up the most charismatic and effective opposition leaders, who in recent times have often been young artists. whether or not they participated in the protests.

“We will have hundreds of political prisoners in just two weeks,” he said.

Protests against Cuba’s worst economic crisis in decades and restrictions on civil liberties first erupted ten days ago in a small town before spreading across the country. By the evening of the second day, they appeared to have dissipated amid intense security operations and internet disruption.

The government blamed mercenaries for exploiting frustrations over the difficulties caused by US sanctions.

Exiles rights group Cubalex, which has compiled a detainee spreadsheet that it updates daily as new reports come in, says more than 500 Cubans appear to have been detained during the protests or after.

He said the tally was likely higher, but some families may fear reporting the arrest of relatives in the event of retaliation such as the loss of their public sector job.

Some of those detained, such as theater director Yunior Garcia, have been placed under house arrest.

“I have four officials outside my door preventing me from going out,” Garcia told Reuters, who observed the officials. “When I go to buy food or cigarettes, one of them accompanies me to keep a close watch on me.”

The majority of those detained have been held incommunicado, while the whereabouts of some are still unknown, Cubalex and HRW said, based on interviews with relatives.

Cubans have posted photos of people they say they cannot locate or share stories of detentions on a Facebook group called “Disappeared #SOSCuba” with more than 10,000 members.

“We went from station to station looking for her,” Alberto Betancourt said of his sister, a stay-at-home mother of two who was arrested during a demonstration in Havana. He located her after six days.

“They won’t let me talk to him,” he told Reuters, biting back tears. “But she’s not a criminal. She just let herself be drawn into the crowd.

Officials from the Cuban Interior Ministry on Tuesday denied that there was anyone missing and said a list of circulating detainees – they did not specify which ones – had been manipulated and included people who have never been detained.

The detainees include prominent dissidents like Luis Manuel Otero Alcantara, who also appeared in “Patria y Vida”, and Jose Daniel Ferrer, the leader of the country’s largest opposition group. They also include ordinary citizens and passers-by, say families and advocacy groups.

Many of those detained have been beaten or abused by security forces or rapid reaction brigades – gangs of civilian recruits organized by the government, said Juan Pappier, senior HRW researcher.

Diaz-Canel said last week “that it may be necessary to apologize to anyone who, in the midst of all the confusion, has been mistreated”, and defended the actions of the security forces to restore “peace”. (Reporting by Sarah Marsh; additional by Nelson Acosta and Reuters TV; editing by Christian Plumb and Rosalba O’Brien)